The Tale of the Pisgah Humdinger If the Bible had been written in the Pacific Northwest, the expression “shake the dust off your feet” would go something like “scrape the moss off…” At least that was my thought as I hummed out of town in my moss-covered truck early one April morning for my first race trip of the 2017 season.  It had been a long and wet winter in Bellingham.  The longest in recorded history.  I had let the legs go good and fallow since my last race in November, and then spent all of December off of the bike (on account of the snow).  For the past three months I had been riding the magic carpet of loam on the trails around town to get back in shape.  Now it was time to put it to the test and wake the senses from hibernation with a trip to the Pisgah Stage Race in North Carolina.

Needless to say, I was keen to get out and stretch my legs in the old crumbly Blue Ridge Mountains and rhododendron groves of western North Carolina.  The objective was the Pisgah Stage Race, a 5-day humdinger of a mountain bike stage race based out of the town of Brevard.  This would be the 9th edition of the famous event and my first time racing it.  Along the way I’d link up with new teammate and North Carolina native Kerry Werner and the good folks at Tennessee Valley Bikes (TVB) in Knoxville. 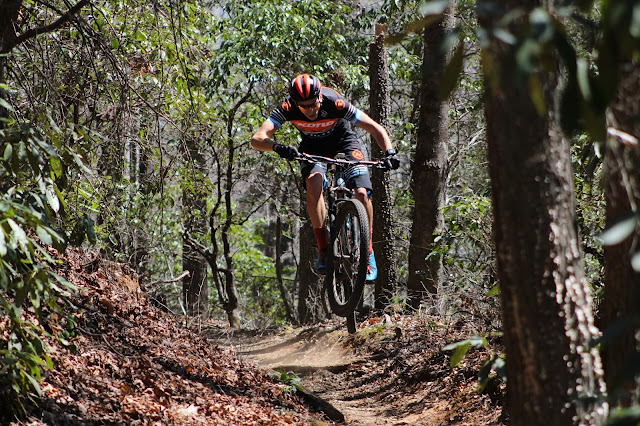 There was no lacking in fine Southern hospitality as soon as I landed in Knoxville.  In no time I had tossed my bag into the back of a big truck and was driving down the highway with a Nikki Lane song twanging on the radio as the sun set over the Smoky Mountains.  A big dinner of hole-in-the-wall Mexican food with Scott and Eric from TVB and the road warriors from Kona Bicycles Demo Tour had me feeling fat as a tick.  With a happy post-travel coma fast approaching, I passed out that night to the sound of the local crickets and katydids. 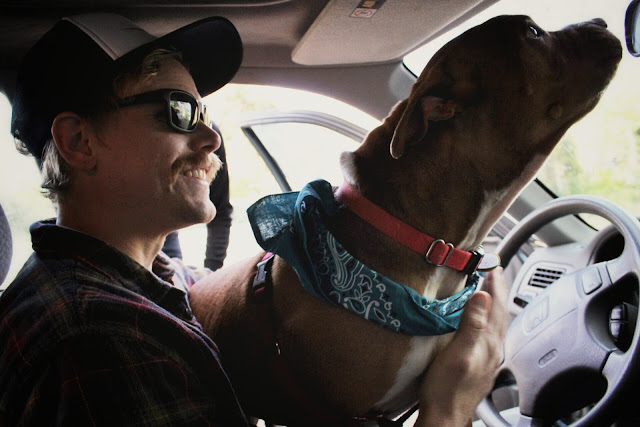 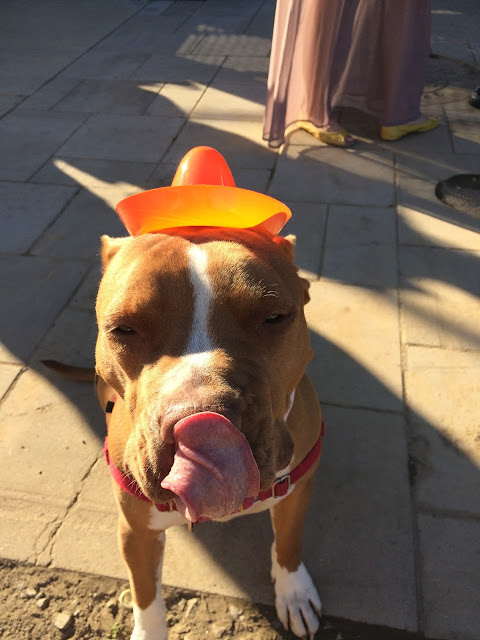 We shook our legs out at the Kona Demo Day at the new Knoxville Urban Wilderness trail system, followed that evening my some official pre-fueling at TVB’s new shop grand opening.  Kerry and I were elected as chief judges for a “guac-off”.  We sampled 14 different kinds of guacamole scoring on 8 criteria each, then topped off on street corn and sausages before bidding farewell to Knoxville and caravanning down the Blue Ridge Highway to Brevard.  We weathered a flat tire on the RV and made it to the Pine Ridge campground and my first night in the Pisgah Forest.  Just before midnight I had pitched a tent on a little grassy nook next the Davidson River with the blue light of the moon shining so bright I could read a book without a flashlight. 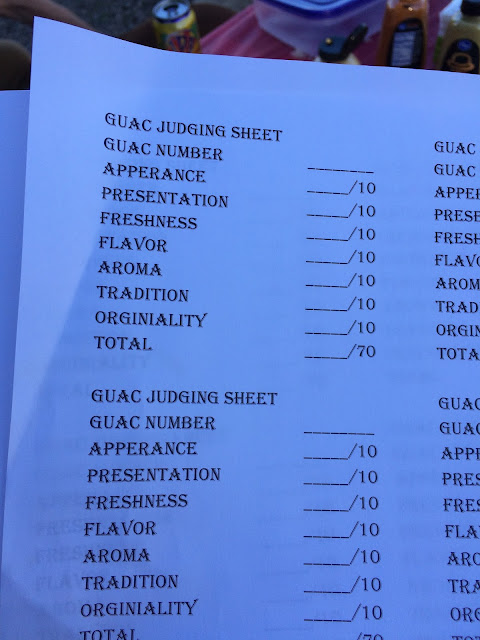 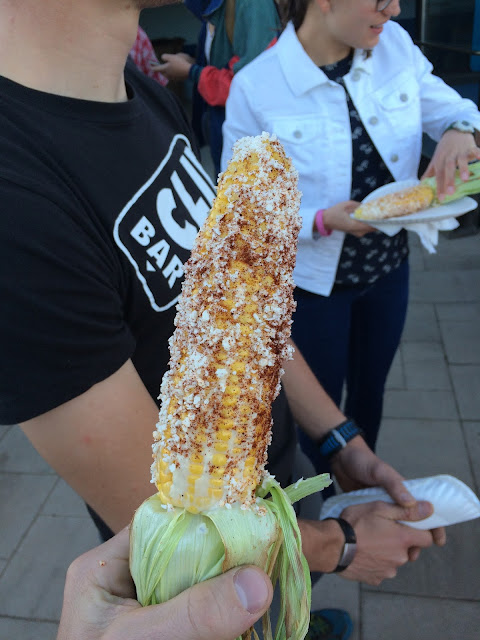 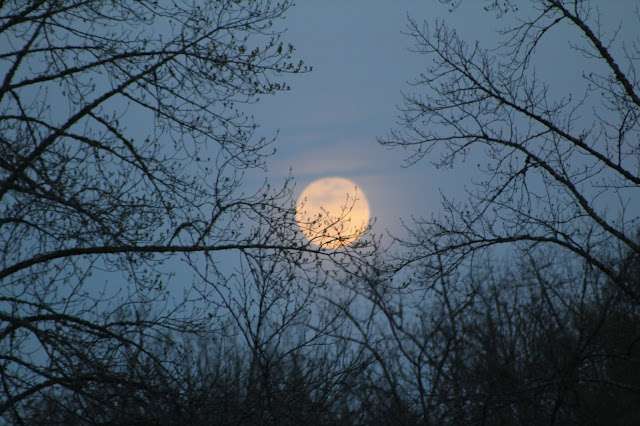 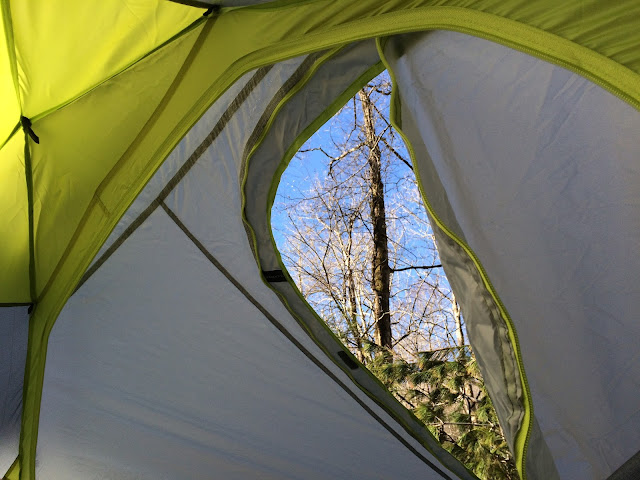 Coffee, pancakes, and NPR News in the morning would begin the routine for the coming week as Kerry whipped up a mighty fine breakfast before our first day pre-riding some of the Pisgah trails.  The weather was looking prime, with sun and short-sleeve temperatures forecasted for the week, maybe a frogwash or two along the way, but otherwise uncharacteristically dry for spring.  Despite the warm temperatures, the trees had not bloomed yet, and the only green in the woods was the dark evergreen of rhododendron groves.  The absence of leaves gave the forest a brisk and flinty appearance. I kept an eye out for the famous white squirrels of Pisgah and imagined old-time Civil War era history as we rolled out to the trails.

“This one’ll get a little loose,” noted Kerry before we dropped into the first descent of the day.  I had expected Pisgah to be rough based on the stories I had heard, but that said, I was caught off guard after four months of riding the luxurious loam carpets of Cascadia.  Yes, our trails in Bellingham can get rough and wild, but there’s a nuance to everything.  The trails of Pisgah are refreshingly raw, rocky and rooty, ungroomed and unapologetic.  Riding fast here requires a smoothness akin to the prolonged vowels of the Southern drawl.  Managing traction and speed are as different here as the accent.  Fundamentals are the same, but the expressions don’t work without the subtleties.  I felt like I couldn’t carry my speed if I had a bucket with a lid on it!  Let’s say my Yankee rigidity would hold me back through the first half of the stage race, but I eventually adopted a smoother Southern style. 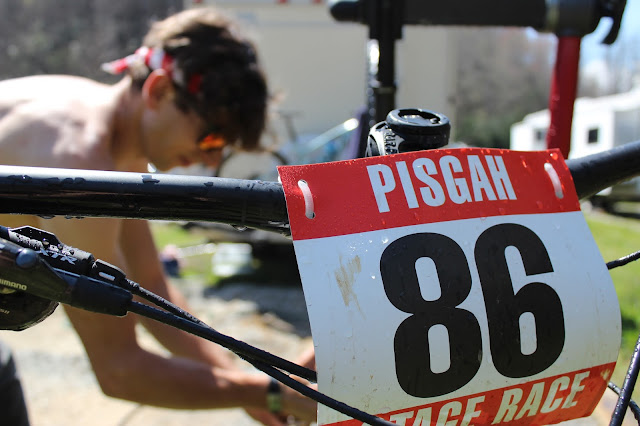 Racing arrived soon enough, and on the morning of Stage 1 the air was abuzz as the crowd of 200 racers from 11 countries lined up for the 5-day, 140-mile journey.  We plunged through an icy stream and into the rhododendron forests.  A group of four, including Kerry, a local elite rider named Tristan Cowie, one Mystery European and myself, quickly separated from the masses and soon we were all seeing double as we navigated our way up and away into the forest.  The battle was on. 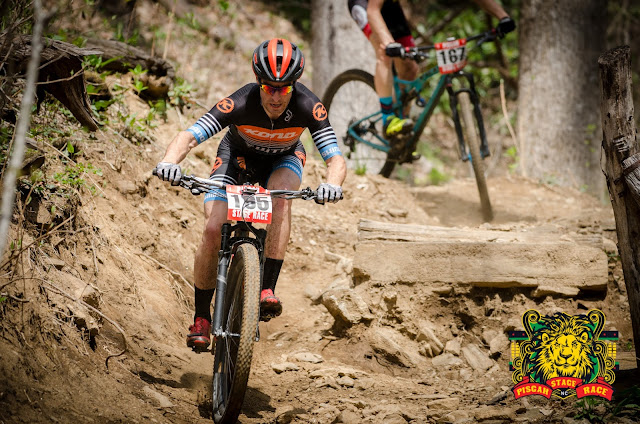 Kerry was the defending champion of Pisgah and bringing the thunder after a career best cyclocross season in 2016, not to mention a long history as one of the top MTBrs in the country.  Tristan Cowie was no stranger to the top-level of mountain bike racing himself, having been a regular on the US National Team in the 2007-2009 period.  And as a local, he knew each of the trails like a tree knows its roots.  The Mystery European turned out to be from Spain and was an ex-World Cup dominator.  With fast conditions and good legs, we blazed through the stage setting a course record a whopping 20 minutes faster than the year before!  Midway through, Tristan launched a perfect attack into a long descent, placing the Spaniard between him and myself.  Spaniard’s skill going down was not as good as it was going up, and Tristan began to float away.  I eventually snuck around Spaniard, but I wasn’t riding very smooth either, and though I was reeling Tristan in, there wasn’t enough of the day left to close the gap.  I came in second on Day 1 by 19 seconds, a gap that would ebb and flow through the week.  Kerry rolled in third. 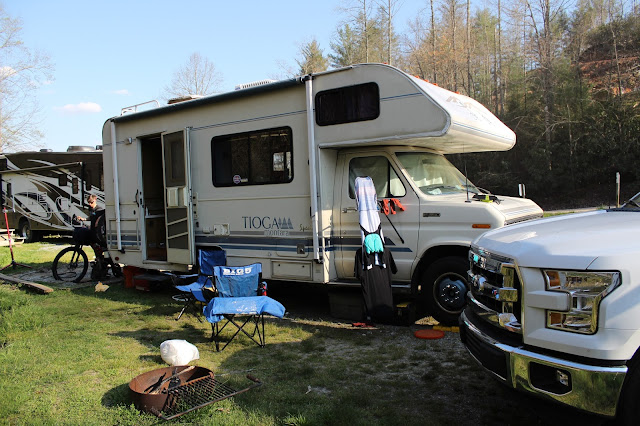 Meanwhile, Kona Supergrassroots rider Jenna Greaser was dominating the Open Women’s category, and would go on to do so through the week.  Jenna is beginning to rack up impressive results, with a top-3 finish a few week’s prior at the TransRockies Moab Rocks stage race in Utah.  Desert to Appalachia, she is a Canadian force to be reckoned with.  In the Open Men’s field and just a possum’s tail behind us was Supergrassroots rider Cory Rimmer, a young and rising star from North Carolina.  Cory put the hustle to the enduro sections like a fart in a fan factory and would go on to take second overall in the Enduro portion of the race. 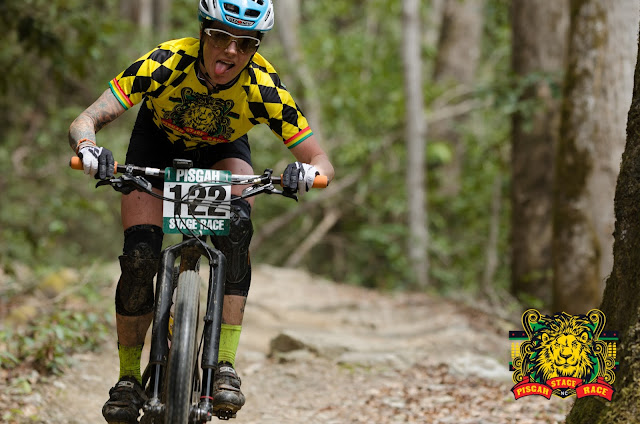 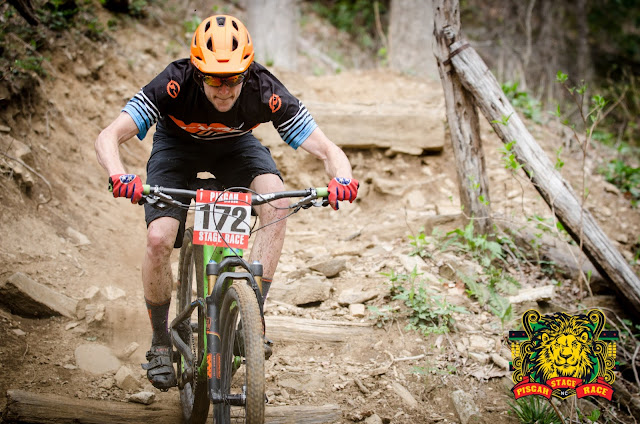 At the front end of the field, the days at Pisgah are relatively short at around 2-2.5hrs each.  The upside is that the fatigue doesn’t stack up the way it does in longer death-march style races where each day is over 4 hours.  The flip side is that the short days make for very intense and fast racing.  The pace each day is faster than green grass through a goose.  Course records fell left and right as we stormed through the hills, beating times set by previous legends of the sport Jeremiah Bishop, Thomas Turner, Sam Koerber and Adam Craig.  Was it the trail conditions, the modern equipment, the legs, or all combined? 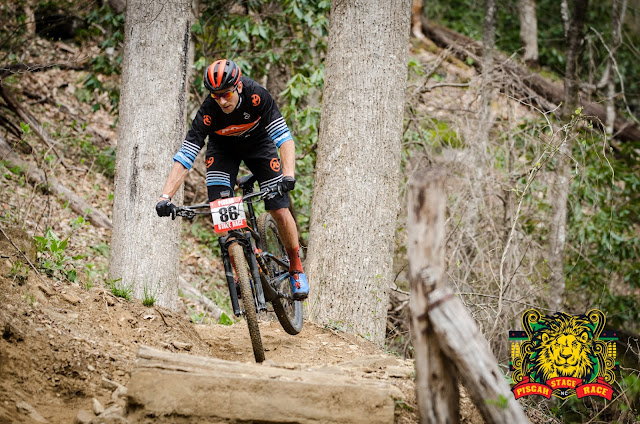 Whatever it was, it made for a tight battle between Tristan and me.  It turns out we were well-matched.  I won three stages and chopped the gap down to as little as 9 seconds, while he won the other two stages.  My advantage early on was in going uphill, a metabolically expensive option. Tristan was already strong as an ox on acid on the climbs, yet his advantage was in going downhill, a much more energy-efficient option.  Each day we logged at least 10 minutes worth of sustained 6 watts-per-kilogram efforts, interspersed with plenty of digs so hard they could make a preacher cuss, and long descents that left the arms feeling like a pair of arthritic snakes full of hot sauce.  By day 4, I was going downhill on pace, but just couldn’t close the gap.  Despite my best efforts, I finished my now customary 2nd place by less than 0.2% after five days of racing.  That’s tighter than a pair of pants on a bloated elephant, and something like my 6th consecutive stage race that I’ve finished as bridesmaid. 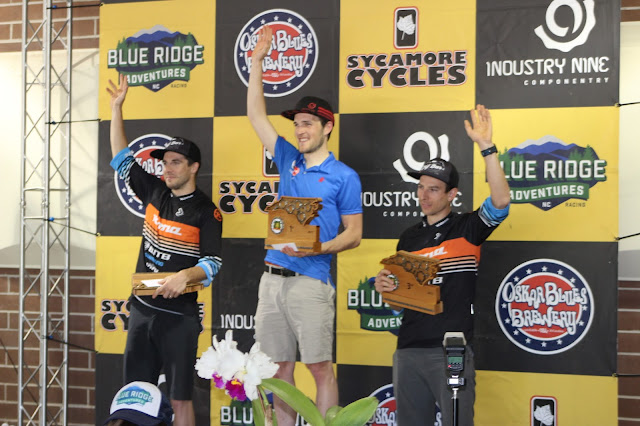 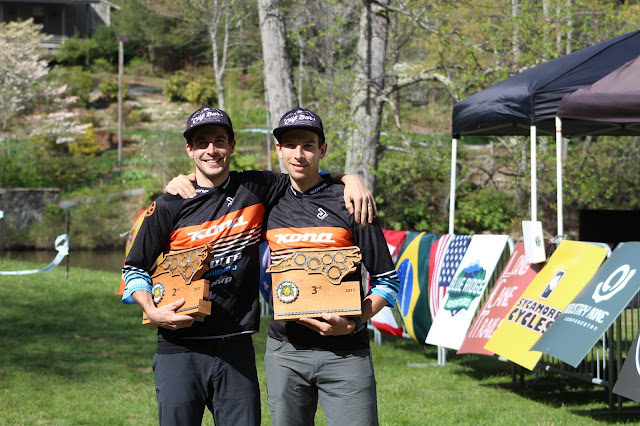 Kerry wrapped up the week in third overall, and took the win in the Enduro, the race within the race, comprised of a timed segment of downhill trail on each stage.  Kerry rode over those rocks, ruts and roots faster than a one-legged man in a butt-kicking competition, and was still there with a cheery smile to make breakfast for us every morning.  When it was all said and done we basked in glory and downed several beers, sprawled under the sun in a grassy field at the after party listening to Nikki Lane live in concert serenade the crowd, grinnin’ like possums eatin’ sweet taters.  It was a damn fine week.

Posted by spaxson at 9:47 AM No comments: