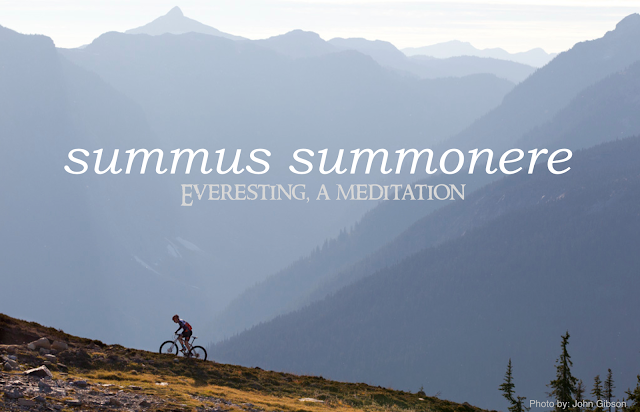 On a fine morning in late July, I set out on a mountain bike ride to Chuckanut Mountain, pedaling up its western flank along Fragrance Lake Road, then down the Double Black Diamond trail to the bottom, doing so again and again until I had covered over 100 miles and climbed and descened the equivalent of Mt. Everest.  Up to that point, it was without question the most colossal ride I had ever done. 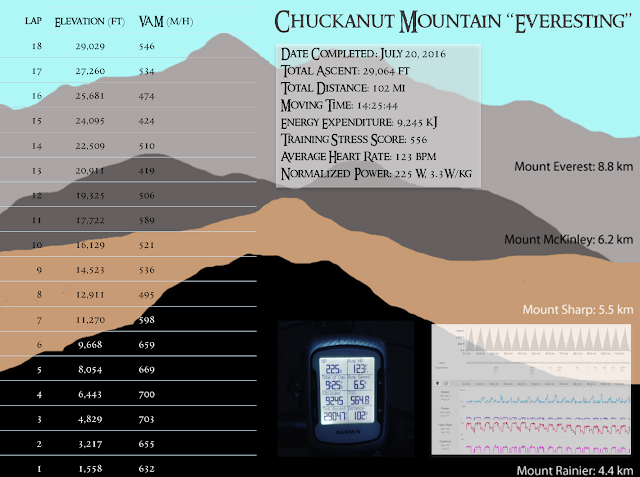 This was not so much a ride as it was a spiritual experiment. Despite my sharing the experience here, it was a singularly personal endeavor. It was neither for training, nor exhibition. I needed to do it for reasons of which I was certain, yet had hardly begun to untangle. The concept of climbing 29,029 feet in a single ride was certainly absurd, and only slightly premeditated. It struck me just a week before while I was in Mammoth, California preparing for my last major race of the season.

In the six months prior to Mammoth, I had been deep into another quest, traveling around the world, competing in high-level mountain bike competitions with the ultimate goal of qualifying for a spot at the summer Olympics. It had been a phenomenal adventure, but the bid itself was unsuccessful. The United States only qualified one starting spot for the Games, and despite my efforts, I was perhaps third in line at best. Though a bigger part of me knew that the journey itself was the true prize I had sought, there was yet a small, tenacious part of me struggling with a sense of failure. And perhaps it wasn’t a sense of failure so much as a sense that something was missing, like the right chord to end a song. I had accepted that this specific Olympic and World Cup quest was over, but now I felt like it was stuck on a flat refrain, unworthy of the grand symphony that preceded it. It deserved a strong resolve, one that would honor the ambition and intention that started it in the first place. A transition to carry all of the positive vibrations into the next movement. This feeling, whatever it was exactly, needed liberation, the sort of liberation that can be so deeply realized through an escapade in the outdoors. 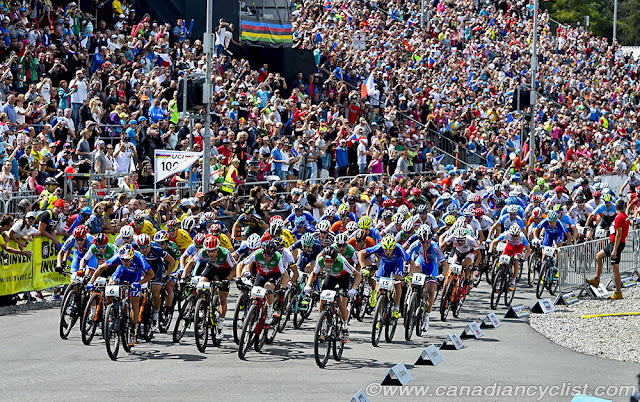 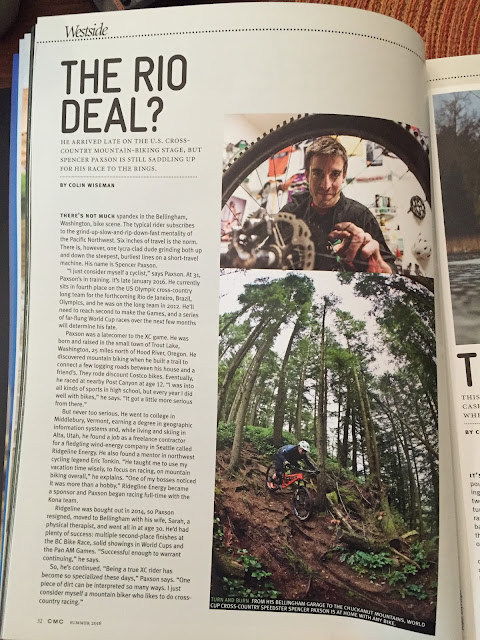 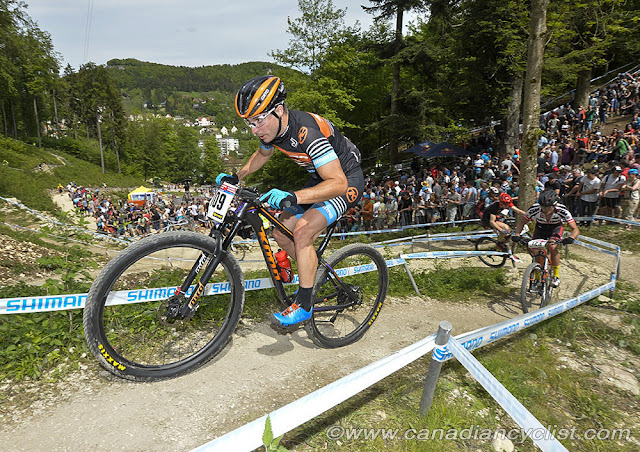 In the four days that this existential, if not hubristic, notion unfolded in my head, I stayed quiet about it. To be clear, my first harebrained intention was to climb 20,000 feet in a day.  The most climbing I had ever done in a single day was just over 11,000 feet.  Nearly doubling that seemed daunting enough. That is until I suddenly recalled a friend some time ago mentioning the concept of “Everesting”: repeating a climb until achieving total elevation gain of 29,029 feet. That was just unsettling. And even more unsettling to discover that “Everesting” was indeed a thing!  There is a semi-formal organization based in Australia, calling themselves the Hells 500, that stewards the concept and attainment of “Everestings” from around the world. There are rules, and there is even an “Everesting” Hall of Fame.  I looked into it on the Hells 500 website for further inspiration. At the time of my inquiry, just under 2,000 people in the world had completed an “Everesting”, and only three in the state of Washington. If I pulled this off, I wouldn’t be setting any records, but I would be the first in the state to do this on a mountain bike. Well, there you had it. That was all the extra encouragement I needed. I shared my plans with my wife, and with my two closest friends the night before over a few beers.

The climb up Fragrance Lake Road to the Cyrus Gates overlook at the top of Cleator Road gains just around 1,600 feet, plus another dozen-or-so on the way back down the trail.  Each complete lap is just over 5.5 miles. The average gradient is a manageable 8.5% comprised of mostly gravel and dirt road with a few sections of narrow trail.  This spot came to mind because of its scenic and quiet climb route, and the excellent trail option for the way down.  The Double Black Diamond-Double Down trail is a singletrack gem, and was completed just a year prior through a collaboration between the Whatcom Mountain Bike Coalition and Washington State Parks. 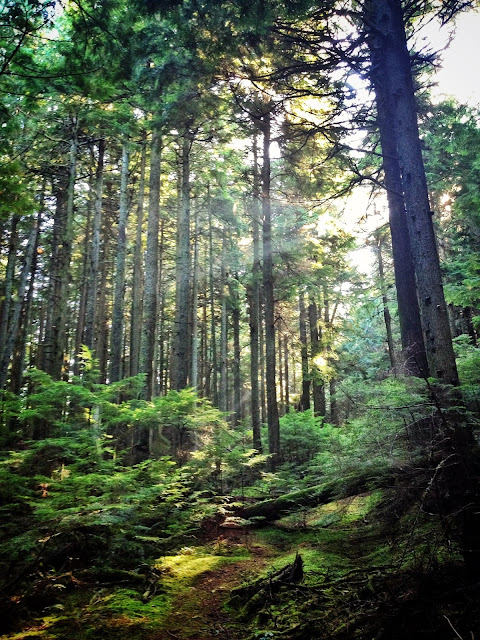 To complete an “Everest”, I would need to do 18 full laps. Having done numerous (and much shorter!) workouts on this climb, I estimated that it would take me around 16 hours to complete the mission. That would fit nicely with the July daylight hours here at 48.6 degrees north. Amidst my back-of-the-napkin reckoning with this challenge, I honestly gave no thought to the distance I would cover. It would just unfold one climb and one descent at a time. I knew it was completely beyond the realm of my normal training.  I specialize in fast-paced races that last for 90 minutes and cover 20 miles or less. My typical training rides average around three hours, burning anywhere from 1,500 to 3,000 Calories (measured as kilojoules on the bike). A “solid” day is around 5,000 feet of climbing and descending. This ride would be six times the vert, five times the duration and over three times the calories. For reference, those regular 5-Big Mac rides were about to be eclipsed by a 17-Big Macs blowout!  The closest thing I do to “ultra endurance” are the multi-day stage races I do once or twice per year.  For example, the 2016 BC Bike Race, in which I placed second overall, took me 15 hours and 49 minutes to complete in seven days, with just over 25,000 feet of climbing.  This ride would be like doing all of that, and more, in a day.  And it wasn't just the climbing that was intimidating.  Descending the height of Mt. Everest mostly on rough, dusty trail was going to be a separate challenge altogether. In short, this single ride would equal nearly a week’s worth of good, hard mountain biking.  I really had not idea what to expect by the end.

I woke up at 4:00AM and enjoyed a breakfast of steel-cut oats with berries, honey and a couple of fried eggs mixed in.  Juggling my coffee, along with a few musette bags full of hydration and calories, I loaded the bike onto my truck and took off for the trailhead. My basecamp was next to a log on the side of Fragrance Lake Road.  Predicting that this unusual stash of Clif Bar product, boiled potatoes, sardines, peanut butter cups, rice pudding, hemp seeds, chocolate milk and coconut water would either intrigue or irritate others enjoying the trails, I simply left a note that read “Pls do not remove :)”. And with that, the ride began unceremoniously with the bleep of my Garmin device, that miniature monolith of modern cycling culture affixed to my handlebar.  For motivation, I had set the home screen to Total Ascent, Elapsed Time, Time of Day, and Distance. 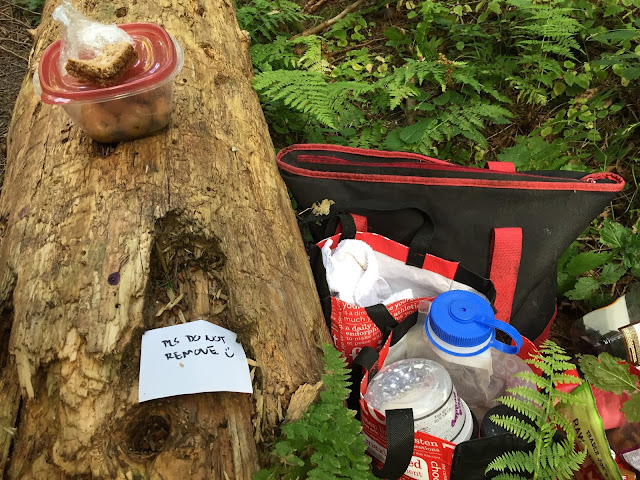 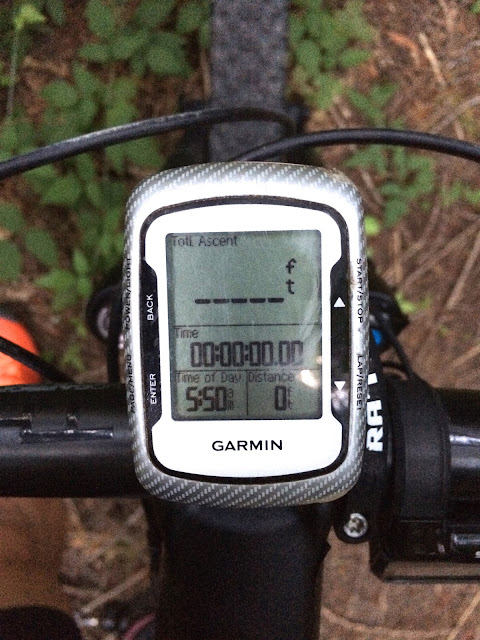 It was 5:50AM and I had 18 laps to go.  I decided I would break it into thirds, six laps for each batch, three batches to the end, only three laps to get half-way through each batch, and three at a time didn’t seem like so many. On this first lap it dawned on me that my 16-hour completion target might exceed the battery life of my recording device! If it didn’t record, did it happen?  My backup solution was to take a picture of my computer at the top of each climb.  Hopefully my phone would last that long, too.  In any case, it was extra incentive to keep the pace up and the breaks short. 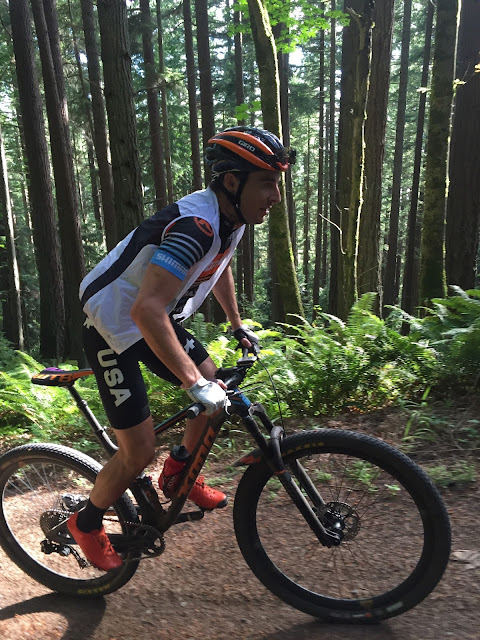 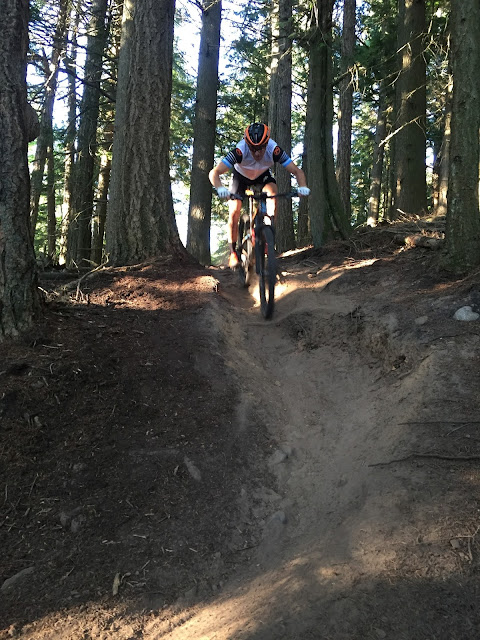 By 10:00 AM I had completed the first batch and nearly 10,000 feet.  That is a big day by anyone’s standards, and I was surprised by how fresh I felt, as if it had so far been a warm-up. It’s amazing how the subconscious mind can partition a massive effort into manageable sensations.  That is, as long as you do you your part to manage the conscious mind and take the process one piece at a time.
The reflections and the climbing continued.  Coincidentally, I also realized on the first lap that 18 repetitions was the same number of years that I had been racing bicycles.  So on each climb I would take a moment to recall the corresponding year, starting with the Gorge Games in Hood River, Oregon in 1998 - saving up money for my first mountain bike, my parents taking entire weekends to drive me around the state for more races.  By the time I surpassed my record for total ascent, I was on lap seven, approaching 12,000 feet and thinking about 2004.  That was the year I started college and upgraded from “semi-pro” to “elite” in the NORBA National Series.  I recalled something about a very steep climb at my first elite race in Durango, Colorado.  At least this climb today didn’t seem that hard. Not yet, anyway. 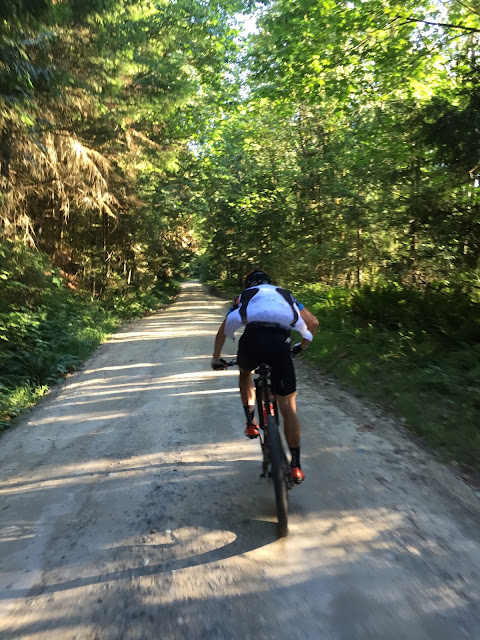 Around 4:00PM, in just under 10 hours of riding, I surpassed the 20,000 foot mark.  For a brief moment up the climb on that 13th lap, two of three batches complete, it was 2010, the year I met the woman who would eventually become my wife.  We lived in Seattle and I worked for a wind energy development company. It was also the year I had a break-out performance at National Championships in Granby, Colorado as a sort of “Cinderella Story of Nowhere” and qualified for my first Elite World Championships.  That was the year things really started to get serious.  This climb was also getting serious.

On the 15th and 16th laps, approaching 25,000 feet, I was feeling it. The descent was the most painful.  I also began to feel the release. In miles per hour, 25,000 is the escape velocity for earth’s gravitational pull.  I was escaping from my own gravity.  Part of it was that my wife, Sarah, had joined for these two laps.  What I felt was a sort of harmony building. Was it that resolving chord I had sought? Harmony amidst this present summons up and down the hill, this pastime on two wheels that had ceaselessly ensured that my life never passed a moment unlived, the people who had fostered the connections to live that life, this body that carried me, this place I called home, this person who was my life partner.  This was the place I had always sought, and had been there before, but now it felt more liberating because of the resolve it brought to this latest adventure. Results and rankings, training targets and podiums all washed away. There was no singular desire I could comprehend a need for over simply existing there at that moment.

On the last two laps, I was alone again, with a renewed vigor to hit my mark.  I reached the top of Cyrus Gates just as the last sliver of red sunlight snuck below the cloud line. Year 2016. 15 hours and 35 minutes. Elevation 29,047 feet. 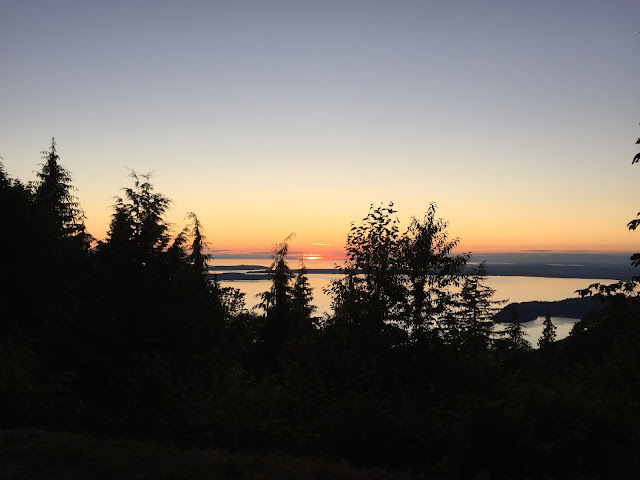 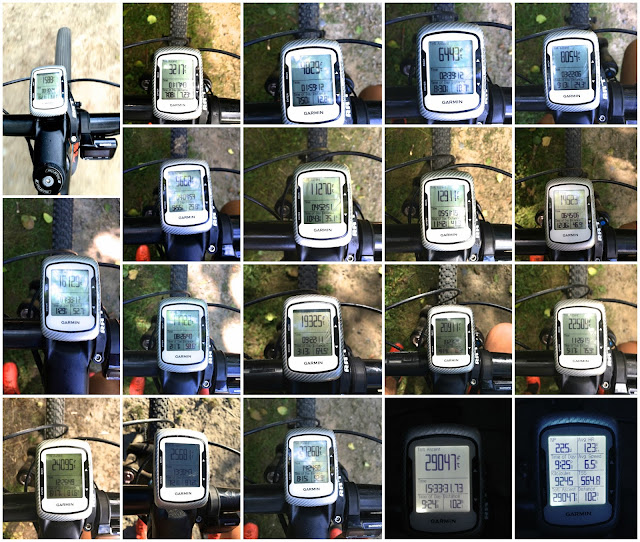 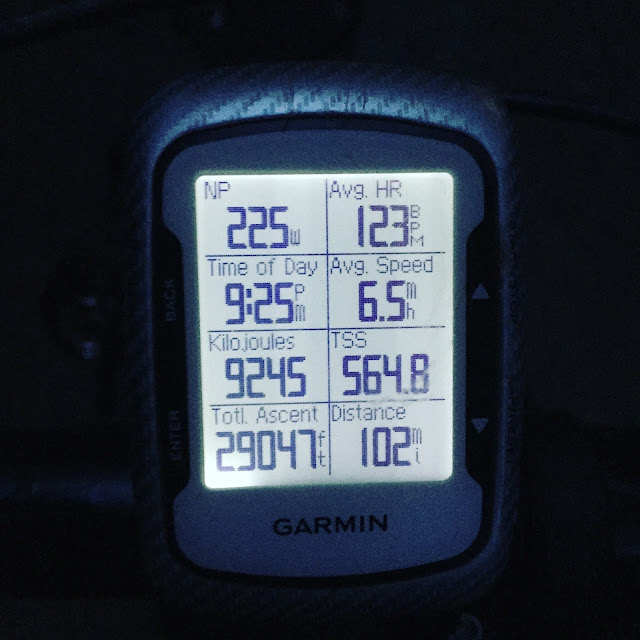 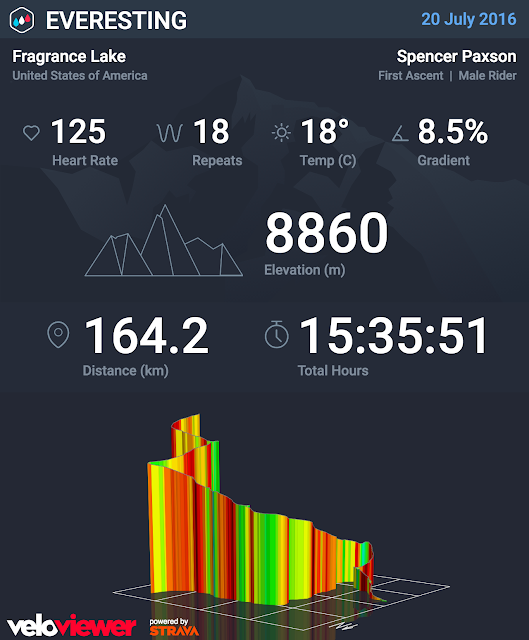