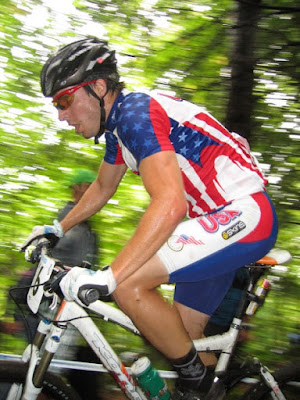 There it was. The 2010 MTB season. World Championships in Mt. St. Anne Quebec was business like any other race, with all these years of racing and learning to make me feel confident and focused on the race. But it was still my first elite World Championships, and there was an undeniable sense of thrill the whole time I was in Mt. St. Anne. After a week of recovery from Windham, practice on the course and getting to know the US Team, I was ready for go-time on Saturday morning.

I started on the last row of 84 riders, race plate #76. My adrenaline had already kicked in before I rolled up to the start line. Hurricane Earl had blown into town, making for a wet and foggy morning. 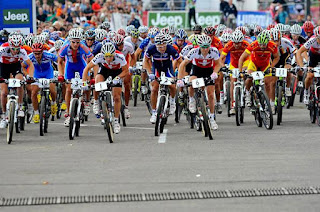 We would complete two start laps (nearly 2/3 or a lap) followed by 6 full laps. I would have to stay within 20% of the leader's pace in order to complete the race. At Windham, after cramping badly on the last lap, I finished 13% down. Still, the slippery and much steeper and technical course at Mt. St. Anne would make this very hard. I knew that as soon as the gun went off, my strategy would be all about keeping my head up and making up as much ground as I possibly could. The crowd was screaming and slamming on the course banners as the clock ticked down to the start. The melee ensued as soon as the gun went off. It was cyclocross mode for the first start lap. By taking the creative running lines followed by fast accelerations back onto the bike, I gained nearly 30 positions in the first 8 minutes of the race. I was glad to by riding on 120mm of suspension on my Kona 120. By the end of the second start lap, I could hear people yelling that I had moved up into the top 40. Not sure if their count was right, but either way, I had gained a lot of ground.

Things were less frantic after completing the first full lap. By looking at the clock, I was maintaining a position around the top 50. The climbs were steep insanely hard. I ran a 1x9 setup with a 32t ring up front. It was easy enough to turn the pedals over, but the pace was full gas in order to not lose time. After that, any bobble on the technical single track cost precious seconds. It was a wild balance of riding at the limit without wasting energy, staying smooth and focused ahead. Everything was ticking. It seemed like a top 50 was definitely in the cards.

Then my rear tire found something sharp and slashed wide open. My heart sank. All the air rushed out and I had to leap off the bike before rolling off the rim. The cut was too big for the Stan's sealant to manage, and also too big to hold a tube in...even with a gel wrapper to line it. This was all a fast assessment trailside. I knew I would need a new wheel to keep riding. I was over a mile from the pit. All that was left to do was run as hard as I could. Even while running I remained as focused as before, but people were blowing by me. 5, 10, 15, 20. Soon I was dead last. I got a new wheel and jumped back on, my legs pretty gassed from the sustained run. I never gave up, but I knew my chances of finishing were done. I fell well outside the 20% margin during the run and was pulled. The race was over faster than it had started. It was a bittersweet way to end, but that's mountain biking.

Regardless, it was still the race of my life. Having everything come together to finish on the leader's lap would have been icing on the cake. Had I stayed in the race, I am confident I could have done so, finishing in the top 50. Based on the progression of this last season, and the fact that Worlds had been such a pipe dream coming into 2010, the biggest success of that day was that I made it to the race, and that I held my own while I was in it. My family and friends were there and took the torch for best cheering squad. They even got their photo in Velonews: 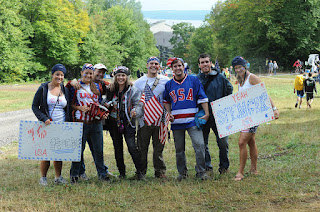 Thank you to everyone, family, friends, Team S&M, Kona Bikes, Ridgeline Energy, Team Keller Rhorback, Stan's NoTubes, and more who have been a part of such an amazing season. Here are some more pics from the trip. Can't wait to see you all soon. Looking forward to some R&R and 'cross season. 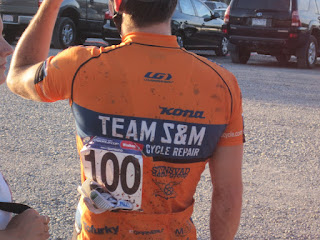 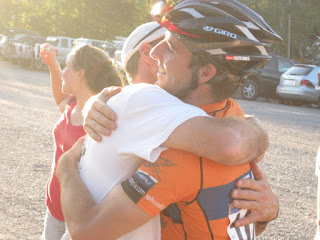 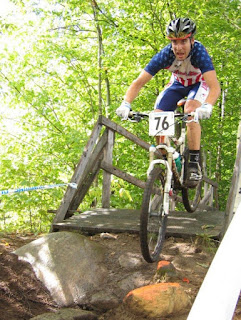 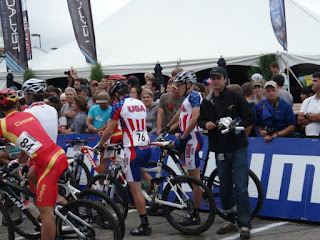 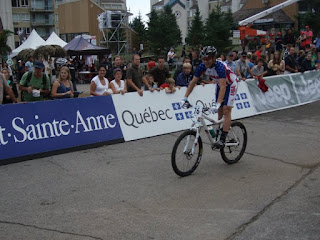 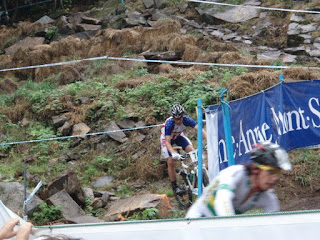 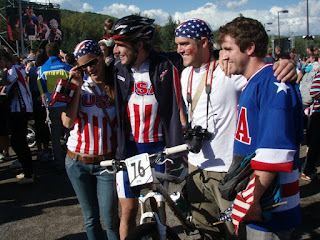